2 Funds To Sweat In The Game Of IPOs

I think it almost goes without saying but when Pinterest (PINS) gets to go public, you can officially say that IPO fever is back! Or maybe it was the fact that our friendly rivals at ETF.com did a wonderful job in a recent article 2 ETFs Riding Record Year For IPOs discussing what’s in the IPO pipeline and what it could mean for IPO funds, which is pretty easy given that there are only really two funds in the space.

First came the First Trust US Equity Opportunities ETF (FPX), launched in 2006 and now with over $1 billion in AUM. 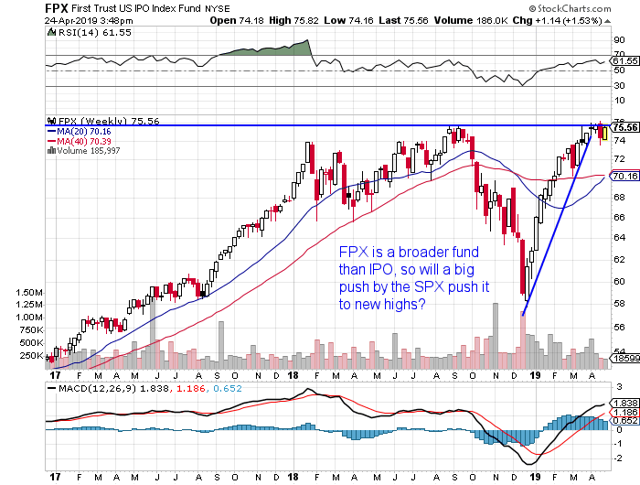 Then the Renaissance IPO ETF (IPO) came along, relying on the insights of Renaissance Capital, a leading research provider for IPOs. 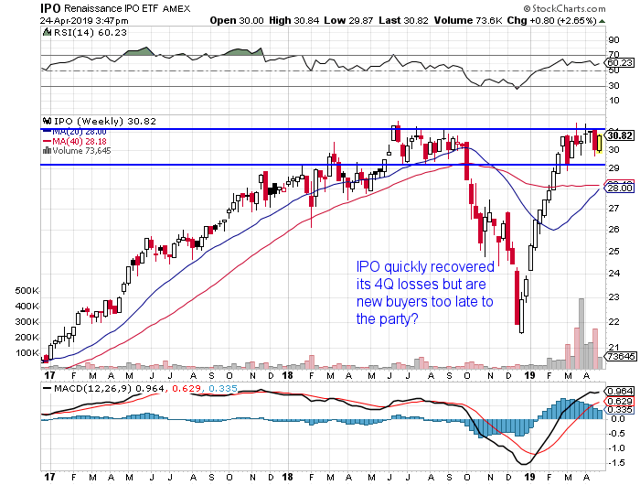 The author of that ETF.com piece, Sumit Roy, did a great job in dissecting the IPO market and examining FPX and IPO which other than the fact they both “IPO” in their name are quite different. It would be easy to leave the analysis there; after all, these two funds are basically the only two funds in the game, offering exposure to one of the most well-defined niches in the market. And with only so many IPOs each year and with their holding periods being the biggest noticeable difference, why sweat the details? Believe us when we say the details are always worth sweating!

We have a twofold take on why you should. First, the mere fact we have “IPO fever” is indicative of the fact that it’s a natural market phenomenon, with amplified returns in certain stages or market cycles, that puts it squarely into the world of smart beta strategies. And anyone who’s ever bought a momentum or high beta fund can tell you that there can be wide variations in smart beta returns, even within a narrowly defined space like momentum which makes picking the right fund very important.

And despite their similarities and limited universes, neither fund is exactly delivering the returns investors are craving. Both FPX and IPO are underperforming their most relevant benchmarks, and their broader sectors, over the last five years and often with wildly different returns, both from the S&P 500 and each other. That makes it even more important for investors to know exactly what’s in the sausage before they take a bite.

Anyone who read that article from ETF.com will know that FPX and IPO have a lot of similarities in how they build out their portfolios. They have similar size and liquidity requirements to be included in their investment universe and then they focus on the larger names for liquidity purposes. They can buy select stocks within days of their IPO or at a quarterly rebalancing and then can remove names after a certain amount of time. And again, throw in the fact they both have “IPO” in their names and no wonder investors might be indifferent. But with IPO up over 30% in 2019 through 4.23 versus FPX’s mere 20% return, investors might be amply compensated for doing their homework.

The first step in understanding these funds, or any fund, begins with a simple ETFG holding report. But you also need a reference fund to make it meaningful, which is why you should always analyze funds in pairs. After all, if you want to understand an active manager, you compare him to his benchmark, but for a smart beta fund, you need to compare them to other funds in the same space.

You can start with the holding files for 4.22 found on their websites where FPX has 100 holdings to IPO’s 71, but they only share 31 names between them, and their allocations to those names are very different. FPX currently has slightly more than 15% of its portfolio in those 31 stocks versus more than 55.9% for IPO including some of its largest holdings! For example, both have large allocations to OKTA, up almost 60% this year, but where FPX has .7% of its fund invested in it, IPO has almost 5.7%.

Comparing the holdings helps us generate the important questions. Why the differences in the weightings? Which stocks are in one fund but not the other and why? Most importantly, how is that going to impact the returns going forward? To answer those questions, we need to understand the three main differences between the funds; their hold times, weighting systems, and global focus.

Our two IPO funds can both add new stocks in a very short amount of time, often just days after they begin trading, but they have very different hold times. After all, exactly when does an IPO stop being new and become just another stock?

Beginning with the older fund, FPX’s benchmark, the IPOX®-100 U.S. Index, will hold onto stocks for up to 1,000 days, a figure it arrived at based on its own research into the IPO effect, which gives the holdings the opportunity to bounce back from the inevitable post IPO sell-off. Its newer rival seems to simply cut that figure in half with a max hold time of 500 days.

That explains a significant chunk of their differences with FPX having older names while IPO is the home of the newest publicly traded stocks, or at least those who meet the liquidity criteria, which includes a size component that cuts out a lot of smaller names. Plus allowing stocks to stay in FPX for so long gives them the opportunity to continue growing till they begin to crowd out newer stocks. Currently, the largest holding in FPX is PayPal Holdings (NASDAQ:PYPL), which with a market cap of over $120 billion comes close to the 10% cap at 9.4% of the fund. PayPal has been a solid performer, but more in line with the broader market. IPO embraces the volatility that comes with newer and smaller names, which gives it a much more mid-cap orientation to FPX’s distinctly large-cap bent.

FPX even takes it a step further when in the event of a merger of one of its holdings, the stock of the purchasers will remain, which is why you’ll find distinctly “unfresh” names like Hershey (NYSE:HSY) or Verizon (NYSE:VZ) in FXP. That helps reduce the portfolio’s volatility, but can also make the fund seem “sluggish” when compared to IPO, especially in an IPO bull cycle. In many ways, FPX is more of a large growth fund with a slant towards newly public companies than an IPO only fund.

But for Renaissance IPO, not having those older names can come back to bite. Case in point, Paycom Software (PAYC), which went public in 2014 and was added to FPX in 2017 and is now up an astounding 55% in 2019, adding to a run that’s seen it drastically outperform the broader market.

Just as important as what each ETF holds is how they weight it, with both FPX and IPO using different systems which helps explain the big differences between their common holdings. FPX relies on the familiar market-cap weighted system, but with a confusing characteristic impacting mergers. The stock of the purchaser will remain in the fund at the prior weighting, which is why a mega-cap name like Verizon has a 4.5% allocation while PayPal is just under the 10% cap (a feature shared with IPO) at 9.39%.

IPO uses a common twist on the market cap weighting system by adjusting for the free float, or the percentage of each stock’s outstanding shares that are available for trading, to improve the overall liquidity of the fund. That’s one reason why IPO’s #1 position is Elanco Animal Health (ELAN) which has a 130bps larger allocation than OKTA despite being of a similar size.

Finally, one of the most important screens used to build out FPX’s index is that it contains only U.S. stocks while IPO takes a broader view of the world. While the majority of its holdings are U.S. names, around 85%, currently some of its top performers in 2019 are ADRs with a strong bent towards the Far East, specifically Sea Ltd. ADR of Taiwan and LexinFintech Holdings LTD (NASDAQ:LX) of China, both of which are up over 80% this year. Overall, the international weighting is roughly 15.75% with 14.7% in emerging market names.

So, what does combining those three characteristics mean for IPO investors? Renaissance IPO has a focus on truly fresh names, thanks to that 500-day turnover policy, along with finding them wherever their business activities take place, not just those with a U.S. focus. That gives you a more focused portfolio with concentrated exposure in the newer names, although you should remember that both funds will focus on the larger end of the IPO spectrum, so if you’re looking for micro-cap exposure, you’ll have to buy individual names.

But remember that exposure does come with a price for IPO, namely significantly higher volatility, which if measured by standard deviation is significantly above both that of an S&P 500 index fund like SPY or more-comparable mid-cap growth ETF. Worse, that higher volatility will hit when your portfolio can least afford it, like in the fourth quarter of 2018 when IPO was down over 23% compared to the S&P 500’s 13.5% loss. Call it leaning into the turn, which can help you when IPO fever sets in, but hurt you just as badly in the other direction.

FPX on the other hand is a more “mature” IPO fund with significantly higher volatility than the S&P 500 and the broader “large growth” category that Morningstar would slot the fund into, but significantly below that for its Renaissance rival. Thanks to its focus on larger-cap names, you can think of FPX as a variation within the large-cap growth strategy, a fund that will keep up with the broader market over long periods of time while IPO is a more pure-play fund. IPO gets you the exposure to hot (or not) new names that you want, but you need to make sure you have a strict holding period of your own when it comes to the fund.