A bunch of fitness companies have jumped into the IPO market this year. It’s not working out.

A bunch of fitness companies have jumped into the IPO market this year. It’s not working out.

A bunch of fitness companies have jumped into the IPO market this year. It’s not working out.
By Ciara Linnane, MarketWatch
Life Time Group shares fall in their debut, while iFit postpones IPO to await gentler markets
Has the U.S. IPO market reached peak fitness?
It may have, based on Thursday’s market, which saw the latest fitness company to go public — Life Time Group Holdings — flounder in early trade, while another expected this week, iFit Health & Fitness, postponed its deal, citing adverse market conditions.

Life Time Group LTH, a Minnesota-based fitness chain backed by private-equity firm Leonard Green & Partners, saw its deal price at $18 a share, which was at the low end of its proposed range. The company raised $702.0 million as it sold 39.0 million shares. The stock’s first trade was at $16.57 at 10:42 a.m. Eastern for 1.8 million shares. At that price, the company was valued at $3.28 billion. The stock is trading on the New York Stock Exchange, under the ticker “LTH.”
IFit, which offers large fitness equipment in the US, under brands including iFIT, NordicTrack, ProForm, and Freemotion, was seeking to raise up to $647 million at a valuation of $6.7 billion. The company “will continue to evaluate the timing for the proposed offering,” it said in a statement.
For investors, the moves may not come as a surprise given the veritable flood of companies in the fitness space to hit public markets this year, all seeking to take advantage of the buzz around “wellness.”
In July, the market absorbed the IPOs of F45 Training FXLV, -8.94% and Xponential Fitness XPOF, +3.89%.
F45, a fitness studio franchisor backed by actor, producer and fitness fan Mark Walhberg, raised $325 million at a valuation of $1.5 billion. Xponential, a boutique fitness brand franchisor and owner of brands including CycleBar and Pure Barre, raised $120 million.
Those came after the February three-way merger between Beachbody, MYX Fitness, a Peloton Interactive Inc. PTON, +4.75% rival, and a special-purpose acquisition corporation, or SPAC, called Forest Road Acquisition Corp., in a deal valued at $2.9 billion.
Other deals in the pipeline include Echelon Fitness, another maker of stationary bikes and Peloton rival, that is reported to be seeking private funding or an IPO, and Hydrow, a maker of rowing machines that is reportedly either exploring an IPO or a SPAC deal.
Yoga gear maker Lululemon Athletica LULU, +0.40% got in on the action in June of 2020 with the acquisition of Mirror, an in-home fitness company with an interactive workout platform, for $500 million.
Most of these companies are loss making and suffered a setback in 2020 at the height of the pandemic, when in person gym attendance was mostly banned. The U.S. fitness club industry lost $20.4 billion in 2020, according to data provided by IHRSA, the Global Health & Fitness Association. That means many of these companies now need cash injections to remain afloat.
So how should investors evaluate the merits of all of these deals?
Kat Liu, Research Associate at IPOX Schuster, LLC, which operates the IPOX indexes, suggested grouping the companies into four categories of equipment, platforms, gyms and hybrids, and looking at how their business model is likely to fare over time, or how “sticky” their product offering may be.
“Peloton and iFit are kind of 80/20 equipment versus subscriptions, with equipment a sort of one-time buy for life,” Liu told MarketWatch. “What they want is to build subscriptions by investing in content so that will be their future revenue base.”
Traditional gyms were hit hardest during the pandemic, but remain popular with consumers. Planet Fitness PLNT, -0.45%, for example, “has been doing crazy well,” said Liu. That company has been public since 2015 and has gained almost 350% in that period.
Hybrids are companies that combine a gym and a platform, companies like Xponential and F45, which offer classes in studios with centralized training programs, as well as on-demand classes. “Those companies may suffer less because they already have physical space and content and that means a revenue stream,” said Liu.
The most exposed companies in the space are pure platforms, as they sell subscriptions that require constantly updated content and new trainers to avoid their customers getting bored of repeating the same routine for months.
“There’s no stickiness there. People look for the cheapest offer and try it out, then if the content doesn’t update, they move on and try the next one,” she said. “You really need to think about how to keep your subscribers.”

A closer look at the financials of the three most recent deals finds that from an underlying financial health perspective, they are closely matched — but not in a good way.
RapidRatings, a company that analyses the finances of public and private companies, assigned F45, Life Time Group and Xponential Fitness financial health ratings, or FHRs, that range from 31 to 37 out of 100, putting all three in the “high-risk” category. The financial health rating is a measure of short-term probability of default.
For F45, the FHR stood at 31 at year-end, compared with 30 in December of 2019, before the start of the pandemic.
“This rating sustains the company in the top half of our High Risk group, with an estimated probability of default of 2.56% over the next 12 months,’ RapidRatings said in a report. “This FHR and the default risk level are the result of Poor Core
Health and current weakness in leverage and earnings performance.”
The core health score, or CHS, measures efficiencies in a business over a two- to three-year perspective. F45 had a CHS of 28 at year-end, compared with 30 at the end of 2019.
Life Time Group’s FHR has fallen to 32 at the end of the second quarter, from 41 in December of 2019, while its CHS has fallen to 20 from 41.
Xponential Fitness’ FHR has risen to 37 at year-end from 31 at the end of 2019. Its CHS has climbed to 43 from 26, putting it in the “medium-risk” category.
All three companies are currently suffering from negative cash flow, and are unable to cover capital expenditures or debt balances through internally generated cash flow, according to RapidRatings.
One other factor behind the recent flurry of deals is the success enjoyed by Peloton.
Peloton went public in late 2019 in a deal that proved timely when the pandemic struck in early 2020 and forced many workers to stay at home. That led to a surge in demand for its connected treadmills and exercise bikes. Peloton’s sales doubled in fiscal 2020 to more than $4 billion, compared with the $1.83 billion posted the previous year.
Since then, the stock has been hurt by an expensive recall of its treadmills, following injuries to children and one death, as well as some of the supply chain issues that are hampering many companies right now. The stock has lost more than 40% in 2021, but has still gained more than 277% since its IPO.
The Renaissance IPO ETF IPO, +2.16% has gained 0.5% in the year to date, while the S&P 500 SPX, +0.83% has gained 18%. 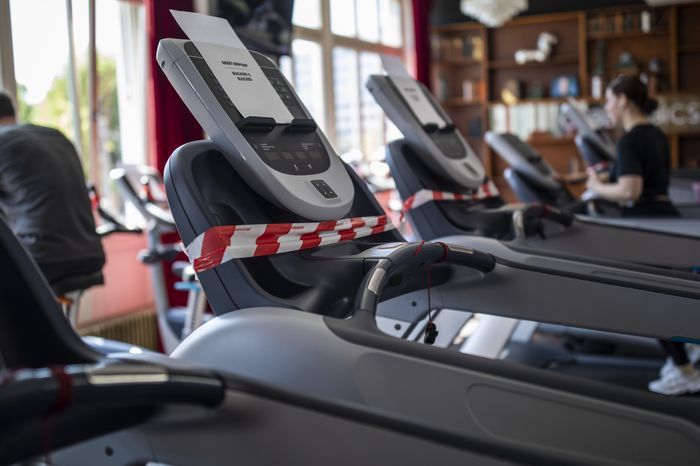 Gyms and fitness studios lost out during the pandemic. MAJA HITIJ/GETTY IMAGES

SoftBank aims for Arm IPO after deal with Nvidia collapses