Snapped Up! First Trust ETF Is First To Pick Up Red-Hot Snap IPO

Snapped Up! First Trust ETF Is First To Pick Up Red-Hot Snap IPO

The $679.9 million First Trust U.S. Equity Opportunities ( FPX ) just became the first ETF to add mobile-messaging upstart and new IPO Snap ( SNAP ) to its portfolio.
The exchange traded fund was expected to include Snap at the next quarterly rebalance, on the close of March 17, but the index provider used discretionary powers to add the Snapchat owner at the close of business March 2 due to “extraordinary circumstances,” Ryan Issakainen, ETF strategist at First Trust, told IBD in a phone call Friday.
Snap currently has a minuscule 0.3% weighting in the FPX portfolio but that could change after the rebalance, Issakainen added. Weightings in FPX are determined by float-adjusted market capitalization.
FPX closed modestly higher Friday as it trades near all-time highs at around 57.
The First Trust ETF tracks a market-cap-weighted index of the 100 largest and most liquid U.S. IPOs. It holds new stock market entrants for roughly four years, and also invests in spinoffs.
Its 102 stock holdings include Hewlett Packard Enterprise ( HPE ), Facebook ( FB ), PayPal ( PYPL) and Twitter ( TWTR ).
Year to date through March 2, FPX ETF has advanced 6.0% vs. roughly 6.6% for the S&P 500. It has gained an annual average 10.9% over the past 10 years, outpacing the S&P’s 7.9% gain over the same period.
Snapchat-owner Snap jumped more than 40% Thursday after its long-awaited public debut and extended its gains on the stock market today , despite analyst warnings about its prospects.
It could be years before the company, which is behind the popular disappearing-message app, lands in core exchange traded funds. Search giant Alphabet (GOOGL) waited roughly two years after its debut to join the S&P 500 index.
Fledgling, newly public companies can be tricky to research and risky to invest in. They are also missing from the major market indexes, and the ETFs that track them, until they become seasoned stocks.
That doesn’t mean ETF investors  get left out of the IPO party, thanks to exchange traded funds such as FPX that make IPOs, or initial public offerings, their business.
A smaller and newer rival, Renaissance IPO (IPO), is set to include Snap on March 20 during the quarterly rebalance of the underlying index, David Sieber of Renaissance, an IPO ETF manager, told IBD in a phone call.
“This will set up the ETF, which is now up 10.5% this year compared to 7.0% for the S&P 500, to be one of the first to include Snap,” he said Wednesday.
Sieber expects Snap to be a top-10 stock in the IPO ETF portfolio, given its size. Snap had a market capitalization of $31.32 billion as of the March 3 market close. 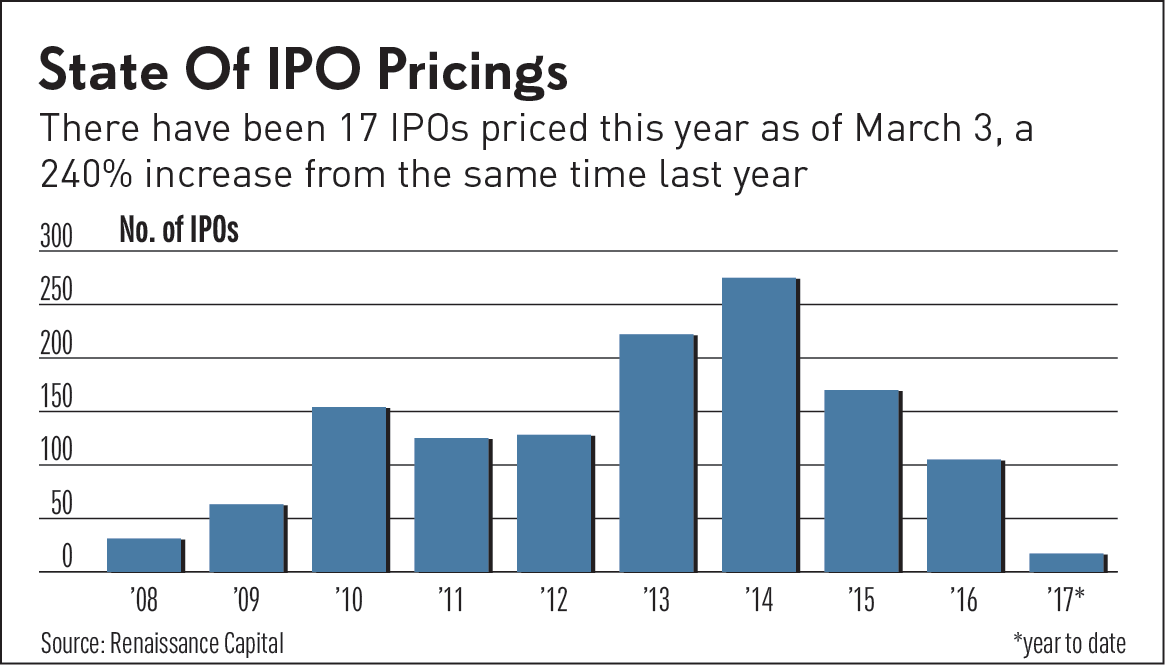 The $13.5 million Renaissance IPO ETF currently holds 46 stocks, with hefty stakes in First Data (FDC) and TransUnion(TRU).
Renaissance IPO typically acquires new issues within 90 days of listing and boots them out after two years of public trading. It can fast-track the entry of sizable new companies such as Snap.
Neither IPO ETF captures the first-day pop, or drop, in any new issue. They tend to include IPOs only after a few days of public trading.
Snap scored big  with its IPO, raising $3.4 billion, making it the biggest U.S. IPO in years.
Snap’s IPO was priced at 17, opened trading at 24 Thursday and closed out the week at 27.09.
View original article on Invest’s Business Daily

ETFs to Add After Snapchat's Blockbuster IPO
next post
Snap debut is strong, but can the hot startup go the distance?